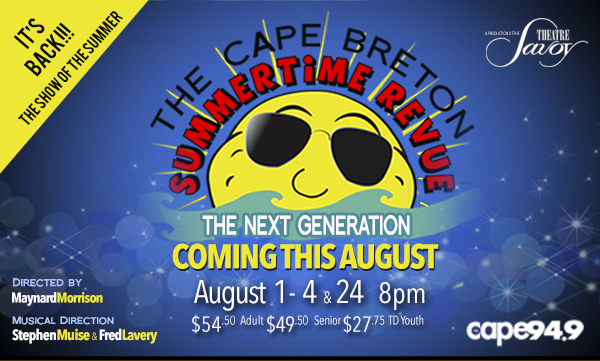 After a successful return to the stage in the summer of 2015, The Cape Breton Summertime Revue – The Next Generation is back again with three performances at the Savoy Theatre in August 2016. The “Revue” is also booked to tour throughout Nova Scotia, and will play Mabou (Strathspey Place), Pictou (Decoste Centre) and Halifax (The Rebecca Cohn).

The band will include Fred Lavery, Stephen Muise, Brian Talbot, Allie Bennett as well as Rachel Davis and Darren McMullen from the band Còig – one of Atlantic Canada’s premiere traditional groups.

In 1986, The Cape Breton Summertime Revue opened at the Savoy Theatre. Following in the footsteps of The Rise and Follies, the “Revue” was comprised of sketches and original music based on themes exploring life on Cape Breton Island. It continued until 1998.

The Cape Breton Summertime Revue helped to launch and sustain the careers of Bette MacDonald, Maynard Morrison, Rita MacNeil and Allistair MacGillivray, to name a few. The show introduced the Rankin Family to the island and then to the world. The “Revue” could not be contained on the island alone and also toured throughout Canada to large and receptive audiences. The show was a part of the fabric of Cape Breton, demonstrating and celebrating our ability to laugh at ourselves and with each other.

The “Next Generation” is proud to carry this tradition forward. The songs and stories continue to reflect the essence of Cape Breton culture. The music, both traditional and original, speaks to our love of home and the comedy is as side-splitting as ever.